When you choose to work with Upside Group Franchise consulting, the knowledge you gain and the sound advice and coaching you receive make franchising a business a stress-free endeavor. We provide our clients with the latest franchise industry resources, franchise sales and development resources, and franchise educational materials to guide them towards success. In addition to providing our clients with exceptional coaching and franchise advice, Upside Group makes finding all of the information you need for franchising a business easy and convenient.

Almost as long as mankind has roamed this world, there have been profit-sharing arrangements. From the feudal lords to international franchise companies such as Sumo Sushi and Mattress Firm, franchising has been an integral part of the world’s economic system.
Medieval Times
Franchising in its most basic form has been going in since medieval times with a sort if sharecropping system in which feudal lords and nobility who owned swaths of land would allow workers to work the land and in turn, the profits from their sales would be split. Some scholars say that this was the start of modern capitalism.
Early America
During the 1840’s, several European brewers permitted particular taverns to sell their ale. This was the beginning of present day franchising. 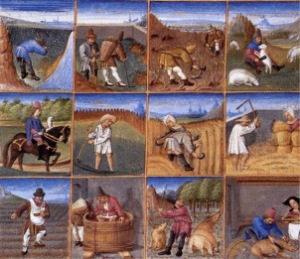 Post-Civil War America
This model of sharecropping was also adopted in the United States after the Civil War in which people were given a portion of land to farm as their own and in turn, split the profits with the plantation owner.
This dynamic allowed sharecroppers to work towards prosperity. It also laid the foundation for modern franchise contract law. First of all, in order for the sharecropper to benefit, the contract had to be fair and equitable towards the sharecropper. Ideally, the sharecropper would receive no less than 1/3 of the profits from the sale of goods.
Additionally, the sharecropper was guaranteed holidays off and in return, he made a commitment to work as efficiently as possible, use tools rather than work by hand whenever possible, take good care of the animals and equipment, and abide by any other requirements as stated in the contract. If there was a dispute regarding labor or wages, then a third party resolution system was in place.
Shortly after the end of the Civil War, Isaac Singer, who had achieved the ability to mass-produce his famous sewing machines, began to franchise out the repair side of his business. Since his sewing machines were sold all over the country, it was impossible for them to be repaired in one centralized location and people could not ship sewing machines.
He began to license out servicing and repairs to local merchants around the country, who were later permitted to become regional salesmen for the machines too. Singer’s use of a contract for this arrangement introduced the earliest form of franchise agreements, and the first modern franchise system was born.
Turn of the Century
Franchising then traveled from Europe the United States. Prior to franchising, there were little if any chain operations, but this practice would eventually form the basis of franchising in the U.S.
1930’s and 1940’s
Franchising as an industry first came into its own during the 1930’s and 40’s when several hotel and gas stations decided to begin offering new dealers a comprehensive system of operational and marketing strategies.
GM began a form of franchising its car sales through auto dealerships and gas station franchises followed shortly thereafter. People began to “take advantage of a business model that offered them a route of fast growth towards national distribution with reduced risk” (BFA, 2013).
After World War II, Pepsi, Coca Cola, McDonalds, and other companies began franchising out their franchise business models largely because it was cheaper to manufacture something (food, soft drinks, etc.) on site rather than ship it. This was the start of ‘business format franchising’ as we now know it; offering a turnkey package from franchisor to franchisee in many instances, it was established as a distinct business model and proven system in the 1950s. The basic franchising system looked much like below:

Since that time, the franchising industry has become a national power in America’s economy and a blessing for risk-averse entrepreneurs. Today, franchising is a major force in almost every industry imaginable, accounting for a disproportionate share of retail sales throughout the U.S.

Franchising has become the clear choice for entrepreneurs who acknowledge their need for guidance and who value a long-term plan for business success. It is also one of the fastest-growing economic sectors in the United States and worldwide. For more franchising facts, download our white paper using the green form on the side of this page.
HERE ARE SOME KEY FRANCHISING STATISTICS:

Utilize our free, online franchise industry resource center to read valuable tips, case studies and frequently asked questions such as, “Is franchising a business wise in today’s economy?” and “Will I make money as a franchisor or franchisee?” No question is too small and no worry is too big for us to address in our complementary franchise self-assessment.

How to Franchise a Business

Franchising a business is a multi-step process that in many cases takes multiple people, the franchise owner, franchisees, lawyers and franchise consultants. All the pieces together create a learning environment where it is possible for owners to learn how to franchise a business.Click here to learn more about the franchising process.

Educate yourself often on all of the valuable information regarding franchising a business in our helpful, online resource center. If the information you seek is not readily accessible on the left or not answered entirely, please contact us so we can better assist you.